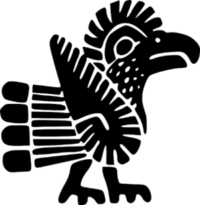 Alectryomancy is a form of divination in which the diviner observes a bird, several birds, or most preferably a white rooster pecking at grain (such as wheat) that the diviner has scattered on the ground. Roosters were commonly used for predictions in different parts of the world, and over the ages, different methods were used. The most common and popular form of this divination based on the observation of a rooster eating corn scattered on letters. A circle of letters was traced on the ground and arranged with some sort of grain placed on each letter. Next a rooster, usually a white one, was allowed to pick at the grains, thus selecting letters to create a divinatory message. The chosen letters could be either read in order of selection or rearranged to make an anagram. Sometimes readers got two or three letters and interpreted them. Additional grains replaced those taken by the rooster.

We do not know exactly how long ago this form of divination had been practiced but can date it back to at least 300 A.D. with evidence given by Iamblichus, a Syrian Neoplatonist philosopher. According to legend, the magician Iamblicus used this art to discover the person who would succeed Valens Caesar in the empire, but the bird picking up four of the grains, those which lay on the letters “T h e o,” left it uncertain whether Theodosius, Theodotus, Theodorus, or Theodectes, was the person designated. Valens, however, learning what was going on, put to death several individuals whose names unhappily began with those letters.

Another method of alectryomancy, supposedly used less often, was based on reciting letters of the alphabet noting those at which a cock crows. Letters were recorded in sequence and then these letters were interpreted as the answer to the question chosen by seers.

Alectryomancy was part of a deeply entrenched tradition among the Romans, where the chicken is used for all sorts of divination with the belief that the animal is a soothsayer. For this reason, the chicken figured prominently in public policy since no major decision was made without using the animal in divination rites. Aside from alectryomancy, the chicken was also used to divine the future with diviners trained to read meanings in the bird’s organs, feather, skin, flesh, and bone.

The Roman chicken divination rituals were complex and conducted with an extraordinary level of organization unparalleled among the ancient civilizations that shared the same practice. One of the earliest forms was developed by the Etruscans, who established an elaborate ritual of alectryomancy using a hen to find answers for life’s most pressing problems. The process involved a circle, which was divided into twenty parts to represent the Etruscan alphabet and each sector was sprinkled with corn. The bird is placed at the middle and the sequence of its pecking was recorded. Specifically, alectryomancy was used in ancient Rome to identify thieves.

I think the lesson we have all learned here today is “Don’t go to battle before you get your chicken’s permission!”

View all posts by Dr. Brown

Cancer is one of twelve zodiac signs ruled by the Moon. It is associated with emotions, intuition, and sensitivity. During this time, people may feel more emotionally sensitive than usual and have strong reactions to situations they might normally ignore or brush off. They may also experience increased empathy for other’s struggles as well as their own. Because Cancer rules home and family life, when the Moon is in this sign people may be drawn towards activities related to comfort and security such as spending time with friends and family or cooking at home. There may also be an urge for solitude or introspection during this time so that inner feelings can be explored in depth.